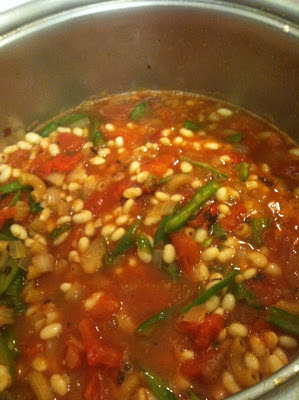 This recipe for Pasta e Fagioli (Pasta and Bean Soup) from ChefMD looks like Christmas! The look is entirely coincidental, but I'm glad for a holiday-looking soup all the same.

Yesterday, I listened to a People's Pharmacy® interview with ChefMD, aka Dr. John La Puma called Healthy Holiday Feasts. I'd heard them talk to him before, but this time I was inspired to check out the recipes on ChefMD.com. Many look quite tasty!

Substitutions
This recipe calls for fennel, which wasn't available at the store yesterday, so I substituted an onion instead. I used Bionaturae's whole wheat macaroni, as that was the smallest pasta I had. On the show, Dr. La Puma talked about using "reduced sodium spicy vegetable juice" which I also didn't have; I used a double can of fire-roasted tomatoes with their juice. I also didn't have peas, so I used string beans.

Goodreads has been a good way to keep track of books I've read, which was my goal. It's made listing my favorite fiction reads of 2012 very easy! The list is online, and I can even  embed it in this post.

American Dervish
by Ayad Akhtar
This was a fascinating book. Interesting insight into the life of Muslims in 1970s Milwaukee, and a horrible betrayal by the narrator. None of the characters was especially positive, but the book was compelling. One tic that bothered me:...

The Sandcastle Girls
by Chris Bohjalian

The Newlyweds
by Nell Freudenberger
Delightful story about a Bangladeshi woman who marries an American man and moves to Rochester. The early story is good, but has been done before. However, the second half - when she returns to "Desh" - is fresh and interesting.

The Cranes Dance
by Meg Howrey
This was a great book for anyone who likes reading about ballet, NYC, or mental illness. The two I know best were handled authentically, and the third was entertaining. It started out a bit lite-n-snarky, but I'd read a good review of ...

The Snow Child
by Eowyn Ivey
This was quite a lovely story -- the "Child" herself was lovely, as were the other characters. Alaska in 1920, too, was a character in the story -- and a very interesting character at that.

Let the Great World Spin
by Colum McCann
This was a lovely novel, though it started out as a series of disconnected short stories. I wasn't sure I'd stick with it - but I'm glad I did. The stories deepened and got very interconnected. I remember when the Twin Towers were being ...

The Night Bookmobile
by Audrey Niffenegger
I loved this book -- all librarians & good readers should read it. I borrowed my copy from the library (most of my reads are library books), but this is one I will purchase, as I could imagine wanting to revisit this one again.

When it Happens to You
by Molly Ringwald

The Wife
by Meg Wolitzer

Clearly I could have added more annotations, but at least I have a good list of books read & loved in 2012!
Posted by CogSciLibrarian @ 9:22 AM No comments:

Email ThisBlogThis!Share to TwitterShare to FacebookShare to Pinterest
Labels: books

Chocolate Mooncakes (Gluten-free). Or, Recipes on the Blog!

I've been cooking & posting photos / recipes to my Facebook page for a while now. That turns out to be satisfying because my friends post comments ... but ultimately is unsatisfying because I can't easily refer people to my baked kale recipe or my spicy Thai slaw recipe.

I got a suggestion (or two) to start a blog ... but hey, I already have a blog, and it's not being used. So ... I'm planning to post some recipes here, in addition to the occasional post about teaching or librarianing or cognitive sciencing.

First up: Chocolate Mooncakes (Gluten Free). or, Black bean, gluten-free brownies. I wanted a relatively healthy and wheat-free baked good to take to various holiday events -- but it had to taste good first. So I scoured the interwebs for black bean brownie recipes & settled on Eat Good 4 Life: Dark chocolate and black bean brownies.

The recipe calls for many of the usual brownie ingredients, such as eggs, sugar, and vanilla.

Variations: I am not a big brownie baker, so I was less familiar with the chocolate aspect. The recipe calls for dark cocoa powder, but since I didn't know if I was going to like these (and thus make them again), I didn't want to buy a lot of cocoa powder. So I bought a single-serving packet of sipping cocoa. I used Whole Foods semi-sweet chocolate chips for the toppings. I also substituted (and toasted) pecans instead of chopped walnuts, just because I'm in the south.

I was flummoxed at the notion of buying instant coffee -- all I could think of was Sanka, and I didn't know where I might big a jar of Sanka these days. While I didn't look hard, I still didn't find any instant coffee, and so I thought I would do without. Then I remembered that Starbucks is making instant coffee, so I bought a three-pack of their coffee-flavored instant coffee.  (I didn't buy their flavored mochas, nor their Christmas blend.)

The cool thing about this recipe, and this is not a variation, but is, imho, A Good Thing, is the use of a can of black beans instead of flour. The texture is not quite brownie-like, but as my friend Tomasa said, is more like a Chinese mooncake. Actually, according to Wikipedia, this is nothing like a typical Chinese mooncake, but it's more like a mooncake than a brownie, so I'm sticking with the name.

If you're gluten-free, or just want to try a brownie variation, I recommend these.
Posted by CogSciLibrarian @ 3:21 PM No comments: