Moore, arguably the mother of all children's librarians, and E.B. White's Stuart Little. Jill Lepore describes the "Department of Work with Children" at the New York Public Library and provides background on Anne Carroll Moore, the NYPL's first children's librarian, including details of how Moore championed good books for children. Lepore describes how Moore pestered White to write a book for children, but then recoiled from Stuart Little. Stuart himself prevailed, of course, and the rest of the article follows Stuart's progress. The New Yorker also includes a blog post by Lepore who "writes about how she got to the bottom of the Stuart Little battle" and a podcast discussion between Lepore and Roger Angell about the article.

Then I downloaded a podcast of Anita Silvey talking about some of the 100 best children's books to students and school librarians at Simmons Graduate School of Library & Information Science. I had the great fortune of taking Modern Book Publishing with Anita while I was at Simmons, and she is terrific storyteller. In this lecture Anita gives, in her words, "30 short book talks," which turns out to be 1-2 minutes about some delightful books for children and young adults. I was enthralled for virtually all of the talk, and I learned many interesting tidbits about some of my favorite children's books like ... 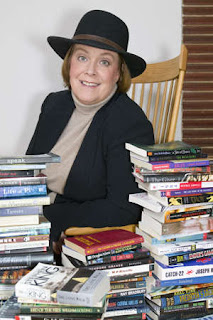 Listen to the podcast to find out about these books and more! (or read Anita's books 100 Best Books for Children and 500 Great Books for Teens) Anita is full of fascinating tidbits, like "it doesn't matter how you get a great book" and arguments why publishers and librarians view controversy differently and "great artists do whatever needs to be done" to get a great book.

If you like (or liked) children's books, or if you have children who read, I highly recommend both the New Yorker article and the Anita Silvey lecture.

Stephen Abram pointed out a fascinating article from the (Toronto) Globe and Mail, citing some research which shows that folks who read fiction have "exceptionally strong" social skills. The Globe and Mail interview Keith Oatley about his research, and they quote him as saying:

"Fiction is really about how to get around in the social world, which is not as easy as one might think," said Keith Oatley, one of the researchers and a professor in the department of human development and applied psychology at the University of Toronto. "People who read fiction give themselves quite a bit of practice in understanding that. And also, I think reading fiction sort of prompts one to think about these questions - you know, what are these people up to?"

The newspaper refers to a June 2008 New Scientist article in which Oatley describes work done in his (and others') 2006 article "Bookworms Versus Nerds: Exposure to Fiction Versus Non-Fiction, Divergent Associations with Social Ability, and the Simulation of Fictional Social Worlds." They identified fiction readers as those who knew names of novelists compared with those who were mostly familiar with non-fiction authors (hmmm, what about readers' advisors?) and gave them two tests. The first, Simon Baron-Cohen's "mind-in-the-eyes" test, measures empathy and social acumen, while the second is an "interpersonal perception" test. They found that fiction readers "had substantially greater empathy and performed somewhat better on the interpersonal perception test" than those who were more familiar with nonfiction authors. (emphasis mine)

Oatley wonders which was the cause and which the correlation; that is, perhaps people who are more empathetic are drawn to fiction, rather than the idea that reading novels promotes empathy. In fact, Mar randomly assigned subjects to read a short story or a non-fiction essay and found "that those who read the story performed better on social reasoning" and that the effect is immediate. Oatley and colleagues performed a similar exercise on 166 participants and found that those who read a Chekhov short story "... underwent larger changes in personality than those who read the control text... Results from the emotions questionnaire indicated that the personality changes were mediated by the emotions experienced while reading: a person's emotional state is known to influence their scores on personality tests."

Oatley suggests that fiction is "a simulation that runs on the software of our minds. ... Just as computer simulations can help us get to grips with complex problems such as flying a plane or forecasting the weather, so novels, stories and dramas can help us understand the complexities of social life." (emphasis mine)

Ah, fiction. Fiction is good for you. I'm going to read my novel, now.

The article is in press (actually, it's still on my computer!) but will be published by the Serials Librarian. Once it's been finalized, I will post the pre-print here with further details about publication.

In the meantime, here are some of the “sites that share stuff” which David described while defining and explaining Web 2.0. As I write in the paper, the demonstration was really key in understanding how these sites work. My notes cannot accurately convey the interactivity of these sites either, so David and I hope that you will go visit some of the sites that sound intriguing. Below, you will find some of the sites David showed, along with some of his examples.

Posted by CogSciLibrarian @ 11:20 AM No comments:

I've just seen / heard about a couple of interviews with Michael Gazzaniga, the father of cognitive neuroscience:

He was on the Australian radio show All in the Mind in June, and they introduce him as follows:

One of the big names of the brain is Michael Gazzaniga, whose career was forged in the lab of Nobel laureate Roger Sperry. His striking experiments continue to uncover the differences between your left and right hemispheres. Today he's on the US President's Bioethics Council, heads up a major project on neuroscience and the law, and is a prolific writer of popular neuroscience. He joins Natasha Mitchell to reflect on the brain's left and right, and the mysterious nature of free will.

He was in Australia for the International Human Brain Mapping Conference, and Natasha Mitchell's 30-minute interview covered split brains, the discovery of "blind sight," and free will. You can listen to the podcast or read the transcript; you can also subscribe to All in the Mind via iTunes.

Ross Buck, professor in the University of Connecticut's department of Communication, points me to an upcoming interview in Seed magazine. While the published interview won't appear until the August issue of Seed, you can read the full transcript of the conversation between Tom Wolfe and Michael Gazzaniga. You can also watch a video of the interview at the Seed Salon. About the interview and video, they 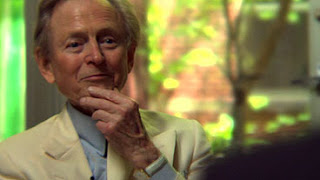 Wolfe, who calls himself “the social secretary of neuroscience,” often turns to current research to inform his stories and cultural commentary. His 1996 essay, “Sorry, But Your Soul Just Died,” raised questions about personal responsibility in the age of genetic predeterminism. Similar concerns led Gazzaniga to found the Law and Neuroscience Project. When Gazzaniga, who just published Human: The Science Behind What Makes Us Unique, was last in New York, Seed incited a discussion: on status, free will, and the human condition.

Note that UConn has several of Gazzaniga's books, and I will shortly order his latest, Human : The Science Behind What Makes Us Unique.

Posted by CogSciLibrarian @ 8:14 AM No comments: