If you're a librarian or a search geek, however, you might want to head on over to the AP Archive page at http://www.aparchive.com/ which offers more search and browsing options. The search box is decent, permitting quotes and Boolean operators. The Advanced search pulldown, right next to the search box lets you search by date or decade, and also lets you specific color, aspect ratio, and original source.

The "Compilations" section offers pre-selected content on several subjects, such as
I discovered a challenge with dates on YouTube, which is troubling, because those are so important in searching for past events.

On YouTube, the dates range from unclear to actually wrong. I've seen some videos that say "published on July XX, 2015" which could be true. But I've seen videos about the death of Princess Diana (for example), that also say "published on July XX, 2015."  This could be true, if they are saying that the video was published to YouTube on that date. But it's impossible to find the video's original date - aired or shot - on YouTube.

The archive site is much better on date display. A story about the Ferguson police chief has a "Date: 08/10/2014 05:18 PM" field. Presumably, that's the date that the video was aired, which was also presumably close to the date that it was shot.

It's much easier to share / reuse AP videos on YouTube, since they use the usual share and embed options. Here's a video of Panda Awareness Week in 20102 (tho' I don't know when in 2012):

Still, for free, this is pretty awesome.

Posted by CogSciLibrarian @ 1:24 PM No comments: 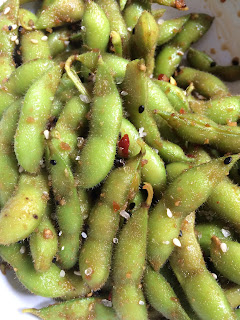 As I was perusing the gorgeous displays at the Durham Farmer's Market today, I lingered at Piedmont Biofarm ... and discovered some fresh edamame. I've made it before, but this time I decided to research recipes to see if I could recreate the yummy experience of the edamame at Dashi.

This wasn't Dashi's, but it was QUITE DELICIOUS!

I couldn't find one, so I made up one, which I'll gladly reproduce and source here.

Add edamame to the sauce and toss; heat until edamame is warm

Posted by CogSciLibrarian @ 1:05 PM No comments: