Emotional Control in the Brain??

The research employed a novel test in which subjects were forced to detect and resolve attentional conflict created by emotionally powerful stimuli. Brain activity was monitored using functional magnetic resonance imaging (fMRI) that can detect moment-to-moment changes in neural activity. fMRI is a version of the widely-used clinical MRI scanning technique.

The study, which is published in the Sept 21, 2006 issue of Neuron, was led by a Columbia University Medical Center M.D./Ph.D. student, Amit Etkin, who explained that, "Tremendous knowledge exists about how our brains deal with cognitive distractions, but we know very little about how we deal with emotional distractions. This is something we constantly do in our everyday lives, otherwise we would be overwhelmed by every emotional trigger we encounter."

Imagine having your own humanoid robot. It is great at its job so your floors and windows are gleaming and spotless, but it has an annoying habit of vacuuming the living room when you have a headache, or offering you a meal just as you are drifting off to sleep on the sofa.

If you sometimes have difficulty reading other people's expressions and emotions, imagine how difficult it will be for silicon-brained robots. They will only ever be able to respond to us in an appropriate way if they can understand human moods.

What robots need is kansei. The Japanese term encompasses a raft of emotional notions, including feeling, mood, intuitiveness and sensibility. Without kansei, says Shuji Hashimoto, director of the humanoid robotics centre at Waseda University in Tokyo, the service robots being developed around the world will not be able to acquire the social skills they will need to get along with tetchy, emotional humans.

Ask is the new Google

Ask is (trying to become) the New Google.

And the Librarian in Black, just posted her 10 reasons to use Ask instead of Google.

Might want to check out Ask.com ...
Posted by CogSciLibrarian @ 9:37 AM No comments: 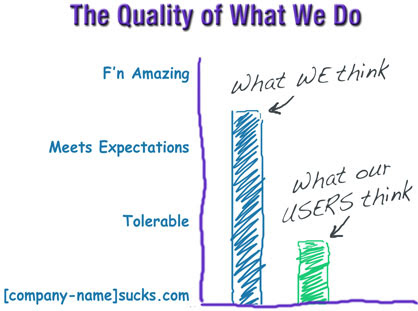 Great post over on the Creating Passionate Users blog.

We need to think like our users! We need to figure out a way. This chart will help me keep them in mind. Hopefully you too, and then we can start changing the world, one tiny web page at a time.

be provocative is pretty good too -- the sketches are terrific.

thanks to Stephen's Lighthouse for the referral!
Posted by CogSciLibrarian @ 8:48 PM No comments:

Email ThisBlogThis!Share to TwitterShare to FacebookShare to Pinterest
Labels: usability

Technology Review has an interesting article called Watching a Single Thought Form in the Brain in which researchers at the University of New Mexico show that when "a volunteer thinks of a word, researchers detect brain activity in Broca's area (yellow arrow), a part of the brain involved in language."

Sort of mind-reading, but not quite. Still if this fMRI technique evolves, it could be used for clinical diagnoses and to help researchers understand how we learn.


(thanks to Ross Buck for the link)
Posted by CogSciLibrarian @ 4:53 PM No comments:

Last Tuesday's Times reports on a study by Vanderbilt University researchers suggesting that interactive television can actually be good for children's development. Earlier research showed that 3-5 year olds who watched Blues Clues "score better on tests of problem solving than those who haven’t watched the show."

What about younger children? It turns out that live interaction between babies and an adult is best for babies' learning, and only a few babies learn from traditional or "Television 1.0"-type interactions. However, the Vanderbilt research "... showed that 24-month-olds are more apt to use information relayed by video if they consider the person on the screen to be someone they can talk to." TV 2.0 anyone?


September 5, 2006
Health / Mental Health & Behavior: When Toddlers Turn on the TV and Actually Learn
NYT
By LISA GUERNSEY
Should babies and toddlers be exposed to television at all? Is there any chance that they could actually learn from the screen?

Email ThisBlogThis!Share to TwitterShare to FacebookShare to Pinterest
Labels: technology

Have you seen the blog A Librarian's Guide to Etiquette? It’s snarkingly funny, if you work in a library and have a certain sense of humor. It’s not for everyone, but I was ROTFL the other day when I read the summer’s posts. Couldn’t explain any of it to my non librarian husband (see the related libetiquette post, Incest, Professional) – but this blog is sure to keep me smiling.

I’m hoping for entries like: Library Jargon, Implementing and Learn Our Ways, Forcing Users to.

It includes older books that shouldn't be weeded such as Ronald A. Fisher's The Genetical Theory of Natural Selection and Julian S. Huxley's Evolution: The Modern Synthesis.

Some newer books they recommend include Encyclopedia of evolution, edited by Mark Pagel & published by Oxford; Richard Dawkin's The ancestor's tale : a pilgrimage to the dawn of evolution; Sean Carroll's Endless forms most beautiful : the new science of evo devo and the making of the animal kingdom; and Kenneth Miller's Finding Darwin's God : a scientist's search for common ground between God and evolution.

Also check out the web sites LJ reviews on the topic; they include:
* Darwin Digital Library of Evolution from the American Museum of Natural History
* Understanding Evolution from the Paleontology Museum at the University of California–Berkeley
* National Center for Science Education

If I were still at Hampshire, I'd be going on a buying spree!
Posted by CogSciLibrarian @ 9:38 AM No comments:

Snakes on the Brain

Great editorial by UC Davis anthropologist Lynne Isbell in yesterday's New York Times about snakes and the evolution of vision in primates.

Isbell argues that "[n]ew anthropological evidence suggests that snakes, as predators, may have figured prominently in the evolution of primate vision — the ability, shared by humans, apes and monkeys, to see the world in crisp, three-dimensional living color." She offers this further proof: "The hypothesis draws further support from what we know about the evolution of raptors: Eagles that specialize in eating snakes have larger eyes — resulting in greater visual acuity — than eagles that don’t."

September 3, 2006
Opinion: Snakes on the Brain
NYT
By LYNNE A. ISBELL
There's a deep connection between snakes and primates, one that may have shaped who we are — and how we see — today.
Posted by CogSciLibrarian @ 9:33 AM No comments:

The great Stephen Abram, in his Stephen's Lighthouse blog points to a Flickr site on Library Signage. There are some good ones & some bad ones. I'm going to use this in my reference class as a discussion point for how the reference area should look, and how it *does* look to patrons.

Web 2.0 sure is good for teaching library school!
Posted by CogSciLibrarian @ 8:30 AM No comments: