#NewToCogSci: Resources for the Curious

Interested in cognitive science? Lots of us are, and I get questions from readers (thanks!!) asking for resources to this interdisciplinary field, which comprises the "...study of mind and intelligence, embracing philosophy, psychology, artificial intelligence, neuroscience, linguistics, and anthropology" (Stanford Encyclopedia of Philosophy).

I'm including three sets of resources, and omitting two. This is due to my own professional and learning biases. I'm a text-based learner and like to read my cognitive science in short bursts (reference material, Twitter, or blogs) or listen to interviews with cognitive scientists. So these biases give me great familiarity with:
I'm not including popular or scholarly non-fiction, partly because there is so much out there and partly because I don't typically read non-fiction (shhh, that's a secret!), so I can't list my favorite cognitive science books here. I'm also not including videos, because I don't have the patience to sit through a video.

Books are linked to WorldCat, so you can see if a nearby library owns the title. You can also easily get from WorldCat to Amazon or Barnes & Noble to order the title for your collection.
all icons from Iconfinder (from the 'Nuvola' icon set)

What's your favorite Cognitive Science resource? Feel free to add yours in the comments!
Posted by CogSciLibrarian @ 8:43 AM 2 comments:

I'm so excited to be facilitating a conversation at ScienceOnline 13 called #Hashtags in the Academy: Engaging Students with Social Media with Lali DeRosier.

We want to talk with attendees -- as well as others around the interwebs -- about the role of social media in the high school and undergraduate classroom.

Is it possible to engage students with Web 2.0 tools in ways that meaningfully support learning?  We will moderate a conversation about what’s worked and what hasn’t with social media in the classroom.

Because it's ScienceOnline, we want the session to be reflective of the audience's interest / experiences, so Lali and I are going to be tweeting some questions to get the conversation started.

Librarians, I'm also interested in how y'all use social media to engage with your students, whether in a specific class or your discipline or your library as a whole. Comments from other non-teaching academics also welcome!

If you do comment, please use the hashtags #scio13 #TagAcad so Lali and I can track your comments.

Questions
Thanks for your feedback!
Posted by CogSciLibrarian @ 9:04 AM No comments:

Librarians like to organize information, such as our books (WorldCat is a prime example -- it's a catalog of over 10,000 U.S. and international libraries' holdings), photographs (see the Library of Congress' Tissandier Collection of 1,000 items documenting the early history of aeronautics), articles (medicine's PubMed database; education's ERIC database)... including ourselves.

We also like to go to conferences outside our own discipline, including the science / communicator conference ScienceOnline. See my post from last January "Non-Librarian Conferences, #Scio12, and #AEJMC." Fellow librarian and conference-goer John Dupuis prompted my post with his post Science Online 2012: Library and librarian sessions. He's been an amazing collector of librarians at past ScienceOnline conferences ... and this year, I'm going to try to collect #scio13 librarians in this post. I'm sad that this year's list doesn't include John (or Joe or Christina or Bonnie), but I am glad to see so many of my librarian fellows will be represented!

From this list of amazing people going to #scio13, I've picked out librarians & library-types (in alphabetical order by last name, starting with me):

The list includes a lot of scientists, writers, communicators, and even a science comedian.

'Tis the season ... to be excited about ScienceOnline!

Email ThisBlogThis!Share to TwitterShare to FacebookShare to Pinterest
Labels: scio13 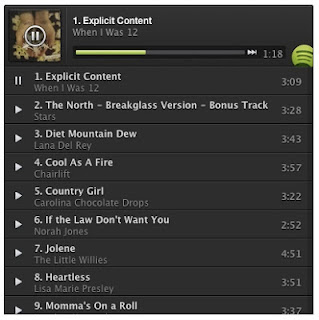 As always, it was a good year for music! I've completed my favorite song list of 2012 and posted it on Spotify.

Posted by CogSciLibrarian @ 9:01 AM No comments: