I've been wondering about the confidence that professional athletes and politicians have been displaying lately. New York Giants wide receiver Plaxico Burress said on Monday that the Giants would beat the Patriots 23-17 in Sunday's Superbowl. (New York Times article). Rudy Giuliani said on Sunday's edition of Face the Nation that he was going to win in Florida.

I hope that the Giants beat the Patriots on Sunday, but I don't have Burress' confidence. I'm not a politician or a pollster, but I didn't think Giuliani would win in Florida. We don't know yet who will win the Superbowl, but we do know that Giuliani didn't win in Florida.

Cognitively, where does this faith, this certainty come from? Is it hormonal, like when a baby is born and the mother is immediately ready to breastfeed, and possibly even "energized"? Is there a hormone for confidence (maybe testosterone? pure speculation on my part...)

I clearly don't have it. I didn't believe the Giants could win any of their last four games, and I was right only 25% of that time, and they are in the Superbowl. And the one time I was wrong, they lost to the undefeated Patriots by only 3 points. Does my pessimism, or native New Yorker status, prime me for this lack of faith in my team? Does Plax's testosterone prime him for his belief that the Giants will prevail on Sunday?

Some cognitive scientist knows, and possibly will refer us to an article or study showing where confidence in the face of insurmountable odds comes from.

In the meantime, go Giants!

Posted by CogSciLibrarian @ 12:36 PM No comments: 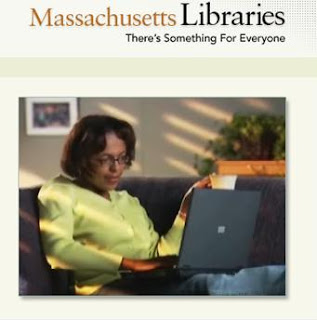 Saw this Massachusetts Library commercial on Ugly Betty the other night (I'm way behind on my tv-watching).

It sends you to masslibraries.gov (which redirects to http://libraries.state.ma.us/), where you can
I wish the commercial were on YouTube, though it is *very* cool.
Posted by CogSciLibrarian @ 11:19 AM 1 comment:

Very cool story on ScienceFriday last week about some astronomy books written by NASA folks that are available in Braille! Ira Flatow interviewed Doris Daou, one of the authors of the latest of several books in the NASA Braille Book of Astronomy series. Touch the Invisible Sky " ... feature(s) [tactile diagrams with] raised outlines and

textures superimposed on the images themselves to indicate how the objects appear differently according to wavelength viewed in – for example, radio, infrared, visible, ultra-violet, or x-ray. The text clearly and concisely explains what each image shows, and even describes how the different types of telescopes capture the images."

Other titles in the series include Touch the Universe and Touch the Sun (links to NASA press releases about the books).

According to ScienceFriday, "The book will be available to the public through a wide variety of sources, including the National Federation of the Blind, Library of Congress repositories, schools for the blind, libraries, museums, science centers and Ozone Publishing."

"Science Debate 2008 is a grassroots initiative spearheaded by a growing number of scientists and other concerned citizens. The signatories to our "Call for a Presidential Debate on Science & Technology" include Nobel laureates and other leading scientists, presidents of universities, congresspersons of both major political parties, business leaders, religious leaders, former presidential science advisors, the editors of America's major science journals, writers, and the current and several past presidents of the American Association for the Advancement of Science, among many others."

Otto especially wants folks to sign their online petition to support their efforts (see who else has signed ... it's a pretty impressive list ...). They're also interested in possible questions for the candidates. Here's what I said:

Bora Zivkovic of A Blog Around the Clock has been writing about this for a while, (see his posts tagged politics), including a six-part series on questions he'd ask the candidates (his preface: "To keep the conversation about the Science Debate 2008 going, I decided to post, one per day, my ideas for potential questions to be asked at such a debate.")

I usually try to stay away from politics in my public life, but this seems like an important issue for science lovers (scientists and lay folks alike) to consider when planning a vote.

For More Information
Posted by CogSciLibrarian @ 12:35 PM No comments:

Thinking About Teaching, and Other Things

I've been so busy filling up my spring dance card that I haven't been blogging. Here's what I'm up to, if you want to follow along at home.

I'm going to be blogging periodically (monthly or so) over at ACRLBlog. The topic will be about academic librarians and faculty blogs. I've been reading quite a few lately (see some of my favorites tagged with teaching at del.icio.us), and thought a lot about what Steven Bell posted on ACRLBlog last year about the carnival of the professoriate. I've got a lot of ideas for blog posts -- themes mostly, sort of a continuation of the carnival -- but I'm open to new ideas, too. Let me know your favorite faculty blogs or faculty blog topics. I'm especially interested in finding more LIS faculty (adjunct or not) who blog.

And I'm going to give a version of a terrific presentation I saw at ASIS&T on usability at the Connecticut Library Association meeting in April. Paul Marty did a "Live Usability Lab" session in which he had members of the audience actually participate in usability testing of institutional repository sites -- he showed rather than explained how valuable usability testing is. Steve Cauffman and I will do a similar presentation using iCONN's resources as a test environment.

I promise I'm still thinking about cog sci, too -- just that my head is full of LIS for the moment ...

If you use any WilsonWeb databases -- what I have referred to as great content, yucky interface -- you might be pleased to know that Wilson has changed its interface for the better. A few of you saw the interface last month when the Wilson reps came to visit, but if you haven't already, I encourage you to look at the new interface.

They listened to users' comments and came up with something that is functional and easy to use. Here are some of the features that I believe are great improvements:
It's not perfect, but the new interface is a huge improvement in my view. So if you've avoided their terrific content like Book Review Digest Plus, Famous First Facts, Library Literature, Reader's Guide Retrospective, among many others ... avoid no more! Make good use of the great content AND decent interface.