My first post on Feline Diabetes & Diet is still getting hits in Google searches, so I wanted to update what I've since learned about it ... just to keep the record balanced (or perhaps more muddled).

I’ve since read Your Cat : Simple New Secrets to a Longer, Stronger Life, by veterinarian Elizabeth M. Hodgkins (c2007). She has carefully studied diet and feline diabetes in her practice and she strongly believes that cats shouldn't eat carbohydrates at all. Her own practice suggests that diabetes can be completely controlled by diet, and she cites examples of cats she has known who have switched to all canned food and no kibbles ... and who have no longer needed insulin. But this is only her practice and not a solid clinical trial, so your experience may vary.

Hodgkins pokes holes at some mainstream studies showing that cat food is healthy, and overall makes some very compelling arguments. Primarily, she states that "studies" show that for young cats, a short-term diet including a lot of carbs does no harm; she argues that this does NOT show that long-term, carbs do no harm.

Research is starting to support Hodgkins' arguments. Deborah Greco, DVM, PhD, an endocrinologist at The Animal Medical Center in New York, explained a "Catkin's diet" (Google search results) at the 2004 American College of Veterinary Internal Medicine. Her report was cited in a November 2004 article in DVM Newsmagazine:

"Cats should have a diet that is high protein, high fat and low carbohydrate," Greco says. "High levels of carbohydrates in dry food causes overproduction of insulin, increased hunger and weight gain."

Hodgkins' book strongly encourages cat "owners" to remove all carbohydrates from their cats' diet, and feed their cats nothing but canned food (or even raw food). Note that her recommendation is for ALL cats, not just cats with diabetes.

As a science librarian, I would like to see well-crafted, substantial, long-term, large-cat, published clinical studies of carb or no-carb diet in cats, diabetic or not. But until then, I will be feeding my healthy, non-diabetic cats low-carb, high protein diets in the hope of keeping them healthy and non-diabetic.

For More Information
Disclaimer:This blog is not a tool for self-diagnosis or a substitute for professional care.
Posted by CogSciLibrarian @ 11:09 AM No comments:

In which we revisit some earlier posts and see what's new. This is partly because now that classes are over, I have time to catch up on old issues of the New Yorker and New Scientist, leading to some blog bits.

Crows
Last July, I wrote about the intelligence of crows and scrub-jays. In March, "hacker and writer" Joshua Klein spoke at TedTalks about crows and how he taught them to use a specially-created crow vending machine.


As Klein leads up to the vending machine (truly amazing), he shows some fascinating videos which nicely illustrate how crows learn, specifically a shot of a crow bending a wire to pick up food in a lab, and another shot of a crow using cars to crack her nuts -- then waiting for the light to change so she can collect the nut bits in safety. I won't spoil the vending machine story for you, as it's really fascinating.

Politics, Emotion, and ... Genes?
I've written occasionally about politics and the brain, and I read an article in an early February issue of New Scientist about some studies that suggest "political positions are substantially determined by biology." Jim Giles summarizes recent studies in various journals, and the findings are startling: twin studies suggest that political orientation is genetic (American Political Science Review, 2005); there may be a connection between fear of death, art preference, and one's political leaning (American Psychologist, 2003), and "there is probably a set of genes that influences openness, which in turn may influence political orientation" (Journal of Research in Personality, YEAR). Giles cautions, however, that "there is no shortage of critics who question the whole idea of linking politics with biology." For more, check out the article, or read some of the articles that Giles summarizes.

The Pirahã
I summarized a New Yorker article about the Pirahã about a year ago; in January, New Scientist interviewed the linguist Daniel Everett, who, along with his family, are the only non-Pirahã who speak that language. If you're interested in the story of the language of the Pirahã, and what it says for language acquisition (including a conflict with Noam Chomsky), the interview is a good read.

Posted by CogSciLibrarian @ 8:37 AM No comments:

Pet "How To" Videos from Cornell

I found some wonderful cat videos @ Cornell University College of Veterinary Medicine which provide details on how to care for your ailing cat. 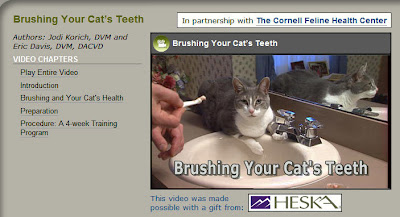 In this case, not even ailing -- but how to brush a cat's teeth. We have a cat struggling with gum health, and we have been brushing her teeth for well over a year. We don't use the implements shown in the video; rather, we use a q-tip and some veterinary oral rinse. And we didn't introduce the new health regime the way the video suggests, tho' if I had to do it over, we would have. (note: early in the video are shots of sedated cats getting their gums cleaned; be prepared to cover your eyes if you don't want to see cats in an operating theater)

They have a long series on Caring for Your Diabetic Cat, which, sadly, I no longer have to do. The video has a great explanation of what diabetes is and how it affects your cat (including some distinctions between feline and human problems related to diabetes), how to give injections, and nutritional therapy. The series on Trimming Your Cat's Claws is very helpful -- and useful if your cats like to scratch things.

If you are caring for a cat, I recommend looking at the list of videos Cornell offers and watching the ones that apply to your cat.

Posted by CogSciLibrarian @ 1:40 PM No comments:

There's a cool database of political ads online at http://projects.washingtonpost.com/politicalads/

The Washington Post has collected (links to) over 500 ads in the database, and this is the description of the resources:

The database includes political advertisements funded by campaigns, parties, committees, and independent advocacy groups. Most of the ads are tied to specific U.S. House, U.S. Senate, or gubernatorial races throughout the country. Some of the ads are more general "issue" or advocacy ads not tied to a particular race or candidate. You can search for ads based on the criteria listed below.

They are categorized by campaign, person, content, tone, characters, etc. Some of you may be especially interested in this group of emotional ads.

It's a nice idea in theory, but of the 5 ads I tried to watch, only 2 worked. Still, if you're interested in politics & communication, you might want to check this out.
Posted by CogSciLibrarian @ 1:40 PM No comments:

One of my student / trainers / colleagues and I co-wrote an article for Computers in Libraries about the UConn peer-to-peer training program. I've written about the Elsevier Student Ambassador Program here before (June 2007), but that post was brief, and the article is more detailed.

Chelsea writes a great deal about how she taught other UConn graduate students the nifty process of looking to see who's cited an article, and by doing find MORE related articles, and finding seminal articles in a particular field. We both like citation searching databases like Scopus and Web of Science because they let you do some very interdisciplinary searching with a few mouse clicks.

The article was great fun to write, and I hope it gives you some ideas about a novel way of searching.

Saw this amusing web-based librarian colorforms-like game (anyone remember colorforms from childhood?) where you dress up your librarian any way you like. I pretty much liked the basic buttoned-up librarian, but I did revise mine just a bit to include beads, a splash of color, and un-bunned hair.

take a look at librariandressup.com & see what you think!

(thanks, as always, to Candy)