I often quote from Ranganathan's Five Laws of Library Science. Here they are, in case you haven't committed them to memory:
What's great is that S.R. Ranganathan was an Indian librarian (often called the father of library science in India) who published these laws in 1931 -- and they are still relevant today, half a world away. The Laws are particularly valid if you substitute another library-themed word for "books," such as databases or information. While teaching reference, I often exhorted my students to "Save the time of the User" by knowing their collection and knowing how to interview patrons to find out what they really wanted. In my new position at UNC's Park Library of the School of Journalism and Mass Communication, I find myself saying "Books are for use" as we begin to circulate our books.

How is this funny? So far, it isn't. But fellow librarian Steve Lawson (check out his great blog, See Also) has created a Classics of Librarianship Mad Lib. In it you can add your own nouns and a verb or two to generate Your Own Five Laws of Whatever, consistent in form with Ranganathan's Five Laws of Library Science.

Browse some of the Laws, or generate your own with his Mad Lib machine. I am chuckling enormously, feeling about as silly as I did when I first created Mad Libs back in 6th grade. It's nice to combine librarianship with 6th-grade silly.

Posted by CogSciLibrarian @ 9:18 AM No comments:

The Placebo Effect is Stronger than Ever

The September 2009 issue of Wired has a terrific article about the placebo effect / response. Steve Silberman writes in "Placebos Are Getting More Effective. Drugmakers Are Desperate to Know Why" that the placebo effect in drug clinical trials has been increasing in recent years, causing many trials to "cross the futility boundary" where drugs are no more effective than a placebo.

Silberman writes: "It's not that the old meds are getting weaker, drug developers say. It's as if the placebo effect is somehow getting stronger."

This is not good for drug manufacturers, of course, but it is fascinating for cognitive science aficionados. Some of the points Silberman raises in the article:
Italian researcher Fabrizio Benedetti, at the University of Turin, has done research showing that "Alzheimer's patients with impaired cognitive function get less pain relief from analgesic drugs than normal volunteers do." Benedetti speculates that Alzheimer's patients can't anticipate the treatment and so only feel the actual effect of the drug, rather than anticipating its effects.

There is a data-mining effort underway, supported by the NIH, called the Placebo Response Drug Trials Survey, in which psychiatrist William Potter and colleagues from many drug firms are trying to "determine which variables are responsible for the apparent rise in the placebo effect." (Silberman notes that the "existence of the project ... is being kept under wraps" -- which is consistent with my experience, as a Google / literature search for "Placebo Response Drug Trials Survey" resulted in no hits.)

Silberman provides a great definition of the phenomenon: "one way that placebo aids recovery is by hacking the mind's ability to predict the future." I enjoyed the article and can't wait to hear more.

Posted by CogSciLibrarian @ 5:09 PM No comments: Vanessa Ruiz, creator of the Street Anatomy blog, "obsessively covers the use of human anatomy in medicine, art, and design." Yesterday, she found this: "Red velvet raspberry cake with French vanilla cream cheese frosting and a chocolate brain by Pamela. She made these using miniature brain molds."

Found via @vaughanbell's tweet, who found it on Boing Boing.
Posted by CogSciLibrarian @ 10:20 AM 2 comments: 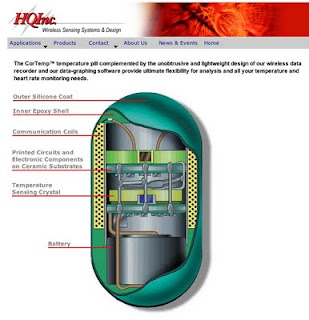 Today's News & Observer had an article about the UNC football team, a body temperature pill, heat-related injuries, and concussions. Combine football with science, and throw in a brain injury ... and I'm hooked.

This CorTemp capsule allows coaches to monitor players' body temperature, which is helpful in assessing whether or not they should continue practice in hot weather. The N&O article has a neat photo of a player's temperature being taken through his back.

The pill is also part of a study that is assessing situations that could promote concussions. Kevin Guskiewicz, head of UNC's department of exercise and sport science, referred to a "theory that dehydration could make concussions more likely;" he added that because symptoms are so similar, it can be difficult to tell if a player is dehydrated or if he has suffered from a concussion.

Guskiewicz has been working on another study, in which sensors are inserted in players' helmets to correlate the amount of force it takes in different locations for a player to sustain a concussion. Used together, the temperature pill and the helmet sensor can help determine if the player has sustained a concussion. Further, because Guskiewicz has been testing the pill on other teams, he says that the the aggregate data can help " 'compare the G-forces to the temperature, and try to correlate whether the [G-forces] get higher when the body temperature is hotter.' "

I'm glad to read that researchers are trying to develop methods to prevent situations that can cause dehydration and concussion, because ... I'm ready for some football!

Posted by CogSciLibrarian @ 6:19 PM No comments:

Fascinating research shows that rooks, members of the corvid family like crows, can use tools to enhance their access to food. In this case, they used stones to raise water level in a tube high enough so they could get a worm out of the tube. The video demonstrates Connelly the rook's ingenuity; later experiments (also available on YouTube) show Cook the rook putting stones in tube of water rather than sand to get his worm.
Cell Press describes their featured video: "Corvid birds are known for their intelligent use of tools. In this video, three different rooks (Connelly, Cook, and Monroe) use stones to raise the water level in a vial in order to reach a floating worm, as described in detail in the paper by Bird and Emery published online on August 6. In the first two trials, Connelly is required to raise the water level by a varying amount by using seven stones and one stone, respectively. In the third trial, Monroe uses preferentially larger stones to get to the goal, and in the last trial Cook drops the stones into a vial with water as opposed to one containing sawdust."
A related note: I love that Cell Press is marketing its authors' research / publication with a YouTube video channel. It's a great way to promote science!
For More Information
Posted by CogSciLibrarian @ 10:16 AM No comments: