After tweeting privately for over 18 months, I have recently created two public Twitter accounts. One is for folks at my new position as director of the Park Library at UNC's School of Journalism and Mass Communication (JoMC), where I am @JoMCParkLib and the other is ... finally! ... as @CogSciLibrarian.

All this Twitter activity has gotten me thinking about how I use Twitter and why I feel the need for three separate accounts. I've also been thinking about it because of an upcoming study at UNC by Fred Stutzman and Woody Hartzog on privacy behaviors in online social networks. They are looking for people who "have started using social networking sites within the last two years, and maintain multiple profiles (e.g. a 'work profile' and a 'personal profile')." I'll use my blog for personal reflection and share my thoughts, in partial answer to "omg! three Twitter accounts" reaction and also in response to Stutzman and Hartzog's interesting call for participants.

My personal Twitter account is for me to stay in touch with my friends. I "know" most of the people I tweet with privately, either in the Real World or from connections made online. I talk about what I'm cooking for dinner, what license plate I'm going to get (NC State Parks), and other miscellaneous chatter that is reserved for friends.

My work Twitter account, @JoMCParkLib, is where I post library items of interest to students, faculty, alumni, and staff who use or might use the Park Library. I want to promote the exciting resources that the library makes available to members of the JoMC and UNC communities. Journalists and other mass communicators such as advertisers and marketers are making good use of Twitter, so I am consciously trying to communicate in a medium that is familiar to my library's audience. If Twitter isn't familiar to folks at JoMC, maybe my Twitter account will encourage them to learn more about it. The tweets are going directly to those who follow me on @JoMCParkLib, but I also have them feed into the library's home page, and I send out a weekly email to faculty & staff highlighting the week's top tweets.

The work Twitter account is also where I'll write the majority of my professional library science tweets; I did some live-tweeting from the recent Special Libraries Association (SLA) conference and will probably do the same for the upcoming Association for Education in Journalism and Mass Communication (AEJMC) conference. At SLA, I was eager to show my followers how libraries are useful to journalists (there were great shout-outs to librarians by Colin Powell, Judy Woodruff, and Robyn Meredith). At AEJMC, I will also be happy to promote the role of the librarian in educating journalists & mass communicators.

I haven't been blogging much, in part because I was teaching and working full-time last semester, and then moved over 700 miles ... but I was still thinking about all things CogSci. There's been some talk that Twitter is supplanting blogging (it is called microblogging, after all), where shared items (or ReTweets, as they are called; RT for short) on a topic are tweeted instead of written about on a blog. Longer, more thoughtful items are written as blog posts. My new idea is to embed my @CogSciLibrarian Twitter feed into this blog and continue blogging longer items of cognitive science interest. I don't expect to post to @CogSciLibrarian as much as I do to my other two feeds, and I will not post personal material to that feed at all.

While I am dividing my Twitter accounts, I will most likely keep one blog, under the CogSciLibrarian name. I will continue to post about cognitive science and library science, with a splash of music; and I will integrate some journalism / mass communication into the mix.

Posted by CogSciLibrarian @ 9:24 AM No comments:

A Rock Star of Neuroscience 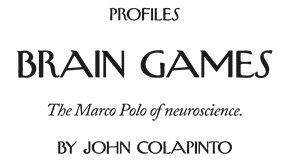 I've been meaning to read the May 11 New Yorker article on V. S. Ramachandran and this weekend I finally had time to do so. It is a great read for those interested in "Rama" or in many of the hot topics in neuroscience for the last 15 or so years.

Rama really is a rock star of neuroscience, as Colapinto's article ably demonstrates. Ramachandran has developed a mechanism for people to overcome -- and even eradicate -- phantom limb pain; he has studied synesthesia, mirror neurons, and brain plasticity. The article provides examples of all of these areas of Rama's expertise, as well as several of his other endeavors (hiding habits of flounder, for instance).

Colapinto includes a charming interlude with Rama's wife of over 20 years (Diane Rogers-Ramachandran is a UNC grad!) which provides amusing insight into Rama's inability to find his car in a parking lot.

I've blogged about Ramachandran several times, including a vibrant TEDTalk, and if you are interested in his work, I recommend this article.

Posted by CogSciLibrarian @ 9:09 AM No comments:

NPR.org/music has some terrific musical material! They have interviews with musical acts of all stripes: rock/pop/folk; classical; jazz & blues; world; and urban. I've mostly explored the first category, which has featured:
You can add these and other musical material to a playlist, and hear albums and songs of all sorts play continuously. This is a highly-recommended summer diversion!
Posted by CogSciLibrarian @ 7:37 AM No comments:

I just finished a delightful novel called The Housekeeper and the Professor by Yōko Ogawa and translated by Stephen Snyder. What was interesting from a cognitive science perspective was that the (unnamed) Professor had a traumatic brain injury which left him with only 80 minutes of short-term memory. He remembers everything prior to the accident which occurred in the late 1970s, but he can only remember the past 80 minutes and anything prior to that is forgotten.
The Professor was a mathematician and copes with his lack of memory by doing mathematical puzzles. He is very interested in prime numbers, and fractals, and the book is full of math (and Japanese baseball).
It was well-written and both the story and characters are memorable. I was particularly struck by the difficulties a person encounters when he has only 80 minutes of current memory, and the Professor's coping mechanisms are fascinating. If you like a good story, math, baseball, or are working with people who have short-term memory loss, you might enjoy this novel.
For More Information
Posted by CogSciLibrarian @ 7:30 PM No comments:

I was so excited about my possible synesthetic experience last week (aural synesthesia?) that I didn't explain what synesthesia actually is. It just so happened that on last week's episode of Australia's terrific radio program All in the Mind, host Natasha Mitchell interviewed neuroscientist David Eagleman. The two talked about his new novel Sum: 40 tales from the Afterlives, and Mitchell notes that Eagleman is "also a leading researcher in synesthesia, studying people who taste sounds, hear colours, and live in a remarkable world of sensory cross-talk."
The interview is quite interesting -- for this topic, that's especially true of the second half, where Mitchell and Eagleman talk about his research into synesthesia and what we still don't know about the brain. Mitchell's blog post summarizes more of the interview and has been left open for comments from synesthetes and others.
For More Information
Posted by CogSciLibrarian @ 8:14 AM No comments:

I was recently in DC for conference of special librarians and I was lucky enough to have a tour of the NPR building. My guide, library director Laura Soto-Barra, asked about my favorite shows on NPR.

News junkie that I am, I said that the top- and bottom-of-the-hour newscasts are tops on my list of NPR shows. Laura thoughtfully took me over to the area where the newscasters work and I was thrilled to meet Ann Taylor and Jack Speer, who speak just the way they sound on the air. I also met the other folks who make the newscast happen, producer Rob Schaefer; editor Jeanine Herbst; and associate producer Whitney Jones. I admit to gawking like a kid. (I was also excited to meet The Two-Way blogger Frank James, who sits in their corner).

The tour continued, and as we walked around the building, I heard the reporters' voices in my head as I saw name plates on cubicles and doors. Claudio Sanchez, Bob Boilen, Felix Contreras, Michel Martin. I didn't meet any of them, mind you, just saw them or even their name plates -- and yet I imagined their voices so clearly it was as if I were actually hearing them. Is this aural synesthesia? Or does everyone hear voices in their heads when they see names?

Regardless, I appreciated the tour and meeting some of the newscasters.

The librarians at UT Arlington are at it again -- if I were still teaching reference, I'd show this video to start a discussion of the reference interview.

Posted by CogSciLibrarian @ 8:28 PM No comments:

I've just run across three cool ideas for promoting science:
BoraZ reteweets an interesting story from science writer Mary Spiro: Rock Stars of Science: Will it hype scientific celebrity and increase research funding? In this Baltimore Science News Examiner story, Spiro writes about a nifty campaign called Rock Stars of Science, pairing actual rock stars like Aerosmith's Joe Perry, Sheryl Crow, Black Eyed Pea will.i.am, and Seal with actual scientists like neuroscientists Ron Petersen, Steven  T. Dekosky, and Sam Gandy. Men's magazine GQ and the Geoffrey Beene Gives Back Alzheimer’s Initiative are working together to create this "promotional" campaign -- which you can download as a pdf. Spiro does a nice job linking the advertising, musicians, and rock star scientists; she also wonders aloud if this kind of project will work.
For younger folks, Linda Braun tweets about a "science-focused kids virtual world" to go along with some science television efforts, "in the name of making science fun." In reviewing the online world, Venture Beat says 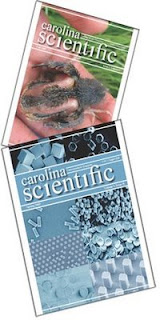 Zula Patrol, on PBS and NBC revolves around aliens who travel from world to world and solve various problems using science. In the virtual world, kids can create an online character, or avatar, and become an alien. They can fly their own spaceships and customize the garages where they park them. They can play mini games within the world that help teach scientific principles, said Deb Manchester, creator of the Zula Patrol.

Check out the game at ZulaWorld.
And on my own (new) campus at the University of North Carolina, some science majors have started a campus magazine called Carolina Scientific, an undergraduate science magazine.  Their mission is to "produce a scientific publication each semester that focuses on the exciting innovations in science and current UNC research."  Recent articles have covered Sea Turtle Navigation, baby birds in Reproductive Biology & Behavioral Neuroecology: The Sockman Lab, and the International Year of Astronomy. Check out their first issue in pdf (Better yet, pick up a copy of it in th School of Journalism and Mass Communication's Park Library)
Promoting science a little bit at a time!
Posted by CogSciLibrarian @ 9:23 AM No comments: