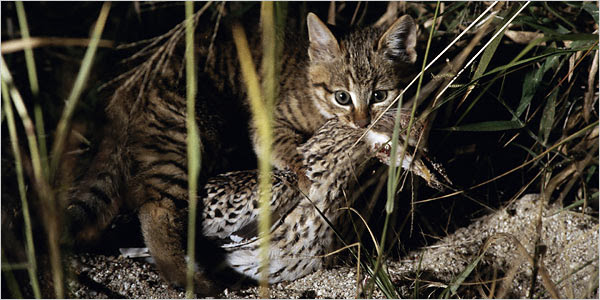 Just as language has been tied to the growth of agriculture (see British & Irish genes: not that far apart, in which I discuss how the Celts may have brought agricultural tools and language to Ireland), so the origin of house cats may be tied to the "domestication" of wheat & barley by early human settlers in the Near East.

Carlos A. Driscoll and his colleagues analyzed the DNA of wildcats and house cats in Scotland, Israel, Namibia and Mongolia and determined that the DNA of house cats and fancy cats (what's the difference?) "falls within the Near Eastern wildcat cluster, making clear that this subspecies is their ancestor.

"... Wheat, rye and barley had been domesticated in the Near East by 10,000 years ago, so it seems likely that the granaries of early Neolithic villages harbored mice and rats, and that the settlers welcomed the cats’ help in controlling them."

This supports Vigne's 2004 assertion that cats were not domesticated by Egyptians but in fact have been domesticated far longer.

The Times quotes Driscoll as saying that " 'The cats were adapting themselves to a new environment, so the push for domestication came from the cat side, not the human side.'" Naturally this was the cats' decision: lots of rodents, warm fires -- what's not to like?

Email ThisBlogThis!Share to TwitterShare to FacebookShare to Pinterest
Labels: animals