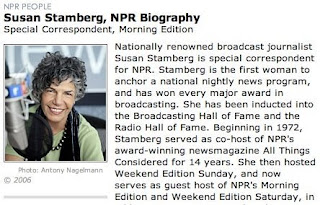 Two interesting interviews with Susan Stamberg about the early days of NPR:
Bob Edwards interviewed her in November 2008 for his eponymous XM Radio show, and it was both entertaining and informative. They discussed some of her interviews, including Henri Cartier Bresson and Jorge Mester; they also talked about the monkey version of her cranberry relish recipe. Stamberg talked to Edwards about the very early days of being on the air at NPR, including a vignette about his early work as a newscaster. I laughed out loud while listening on the bus.
The interview is available on Audible, where it is described:

In the early 1970's, Susan Stamberg was one of the first producers hired by the fledgling National Public Radio and later she became the first woman to anchor its nightly news program, All Things Considered. Bob talks with Stamberg about her experience as a radio pioneer, what she feels makes a great interview and the true story behind her mother-in-law's Thanksgiving cranberry relish.

More recently, NPR librarian Jo Ella Straley interviewed "The Mother of Public Radio" and posted the 17 minute piece on the NPR library blog, A Matter of Fact.
For More Information
Posted by CogSciLibrarian @ 10:13 AM