A New Kind of Concept Map?

A few weeks ago, I blogged about Using Math to Predict Musical Hits. Turns out that before Mike McCready was on ScienceFriday, he was interviewed by Malcolm Gladwell at the 2007 New Yorker Conference.

He was a bit more technical with Gladwell than he was on ScienceFriday, and if you watch the video, you can see his PowerPoint slides showing how hit songs cluster together.

The most interesting part was when McCready demonstrated the ability of his software to recommend music based on stuff you already like. He took a few of Gladwell's favorite songs (which was accompanied by a charming warning that it's socially nerve-wracking to announce one's favorite songs to strangers). 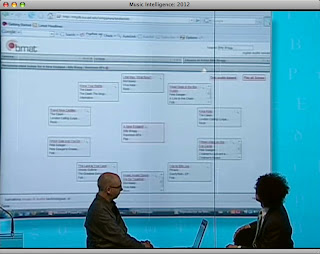 Gladwell first offered Billy Bragg's "A New England." McCready plugged in both social & musical variables and came up with recommendations such as Pete Seeger, the Clash, Woody Guthrie, Morrissey, and Phranc. "Nothing potentially embarrassing in that list," Gladwell commented.

McCready was careful not to indicate whether or not "A New England" would be a commercial hit; instead, in this instance, "A New England" is at the center of its own cluster and other songs are swirling around it. McCready's software is using both social context and musical composition to generate these recommendations.

It's an interesting idea, and it's fascinating to see it in play in this interview.
Posted by CogSciLibrarian @ 1:14 PM