Pinker starts with some examples of scientific illiteracy, including a woman who doesn't want to eat tomatoes with genes in them (he reminds us later that "all living things contain genes"). He notes that people take pride in their scientific illiteracy: "Though we live in an era of stunning scientific understanding, all too often the average educated person will have none of it. People who would sneer at the vulgarian who has never read Virginia Woolf will insouciantly boast of their ignorance of basic physics." 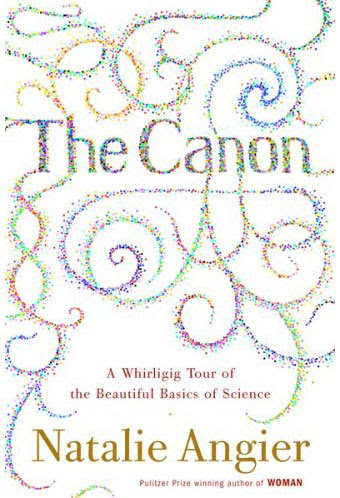 Further, "[i]t is an astonishing fact about our species that we understand so much about the history of the universe, the forces that make it tick, the stuff it’s made of, the origin of living things and the machinery of life. A failure to nurture this knowledge shows a philistine indifference to the magnificent achievements humanity is capable of, like allowing a great work of art to molder in a warehouse."

Angier's book, Pinker writes, brings non scientists (i.e., me) towards scientific literacy by covering "probability, large and small numbers, physics, chemistry, evolutionary and molecular biology, geology and astronomy. Though the material is up-to-date, Angier stays clear of cutting-edge discoveries and in-house controversies." He also suggests a reason why newspaper coverage of sciences does not advance scientific literacy: reporters write about the latest discoveries or controversial topics rather than provide less-newsy explanations of how things work. Pinker has some trouble with Angier's writing, suggesting that in an effort to make science interesting she writes in "a blooming, buzzing profusion of puns, rhymes, wordplay, wisecracks and Erma-Bombeckian quips about the indignities of everyday life." It's too bad; I've seen this before in pop-science.

Nonetheless, Pinker is a strong advocate for scientific literacy. In an editorial preceding the book review, the Times quotes an email from Pinker explaining his interest in writing popular science: " 'One was teaching, which has a similar audience — smart people who are curious about a topic but don’t know the jargon or the busywork of the people who study it.' He also cited a lifetime of science reading, 'beginning with George Gamow's wonderful One, Two, Three ... Infinity when I was a child, and continuing to Richard Dawkins, John McPhee, Stephen Jay Gould and others as an adult.' "

This is an excellent exhortation to libraries of all stripes -- not just the public libraries -- to purchase popular science books. I'll be buying Angier's book for my library, and also for my home collection.

For More Information
Pinker, Steven. "Sunday Book Review: The Known World." New York Times, May 27, 2007. "A refresher course on the fundamentals of science that every person should master."

Angier, Natalie. The Canon : A Whirligig Tour of the Beautiful Basics of Science. Boston : Houghton Mifflin Company, 2007.
Posted by CogSciLibrarian @ 7:37 AM

Thank you for this suggestion. Another wonderful book of this genre is Bill Bryson's "A Short History of Nearly Everything". I listened to it and I recommend "reading" it like that-his sense of humor really shines through in that format.